​ ​ How much do we slow down during holidays? A Toggl analysis. - Toggl Blog ​ ​ ​ ​
Download The App
Written by Liisa Toompuu

You always hear about those studies that have found that American workers log the most working hours per capita in the world. Or that Germany is the most hard-working nation in Europe.

Or that in Scandinavia, jobs are simply a way to make money for free time. We started wondering one day whether this is also reflected in Toggl users’ behaviour…

So we took a total of 3.5 million hours that were tracked with Toggl during 5 weeks between December 2012 and February 2013, and looked at them with the help of Google Analytics

We normalized the results to equal scales so that they’d be comparable and then put the data into charts to illustrate what came out. We will now share with you the fascinating stuff that was revealed with this about the real working (Toggling) habits around the world.

The most hardcore workers live in East Asia

We started with some overall comparisons of activity levels during holiday versus non-holiday seasons in North America, Europe and East Asia. 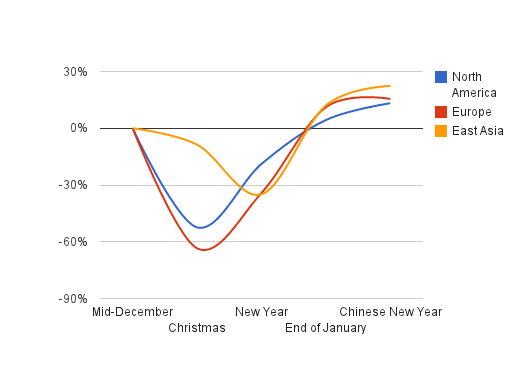 The biggest slowdown for both North American and European users was Christmas when activity levels in North America dropped by 52% and in Europe by a whole 63%. East Asia’s peak slowdown came a bit later, during the New Year festivities, and was much lower, with a total drop of only 35%. 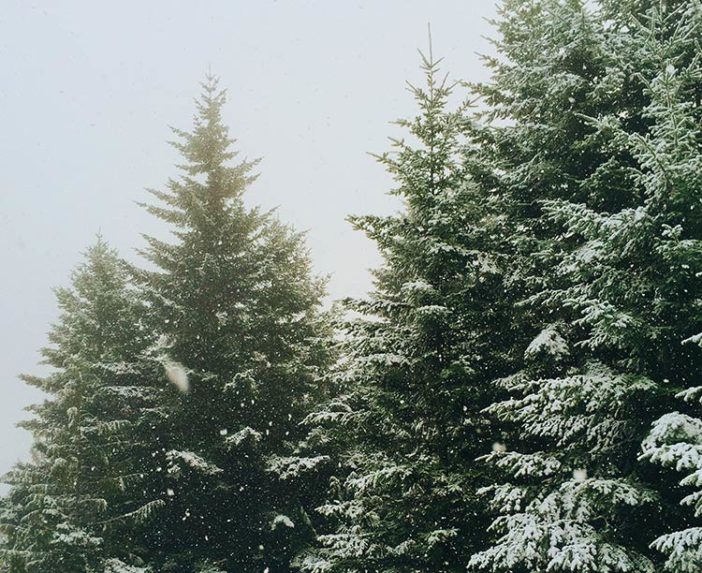 Looks like Christmas is not celebrated quite as widely in East Asia. We predicted the Chinese New Year (mid-February) to have a fairly strong effect on East Asia’s activity, so were surprised to find in fact the opposite with their 22% increase from original activity levels. Respect to all the hard-working East Asians!

Digging into a bit more detail, we split Europe to Southern and Northern, leaving North America on the graph for a baseline also. 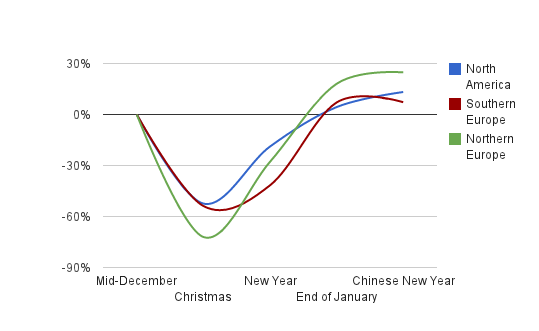 What a finding! Despite all the talk of siestas and three-hour lunches in Greece, Italy, Spain and the likes, Southern Europe’s Christmas slowdown of 53% tells a different story since it’s totally on a level with North America’s 52%. 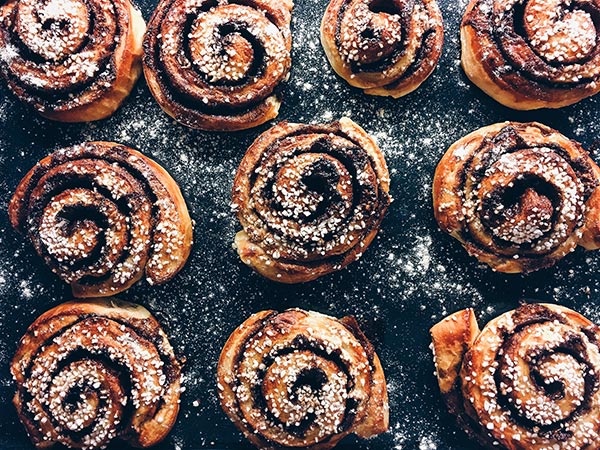 The Scandinavians, though, fit their stereotype perfectly – they take their holidays very seriously with a whopping 72% drop in activity. This is a record for all the regions. Once the Northern Europeans return to work, though, they also beat all other regions with their 25% increase in activity by February. I guess they live by the work hard, play hard mantra?

The average amount of paid holidays in Italy, France and Germany is 38 days (how nice!). Where does that stand in comparison to Eastern European countries who are also known to get quite a few paid days off? 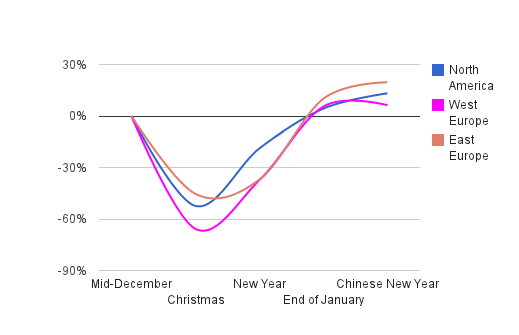 With a drop of only 45%, East Europeans seem to be the next hardest working area over Christmas after East Asians. Although, the drop rate in East Asia was only 8% then, so actually the two areas should probably not be mentioned in the same sentence.. 🙂

With their 66% drop in activity, West Europeans seem to have fully enjoyed their Christmas. During New Year celebrations, though, East and West Europe both level out to a 37% slowdown while North America returns to work much sooner, being only 18% less active than in Mid-December. 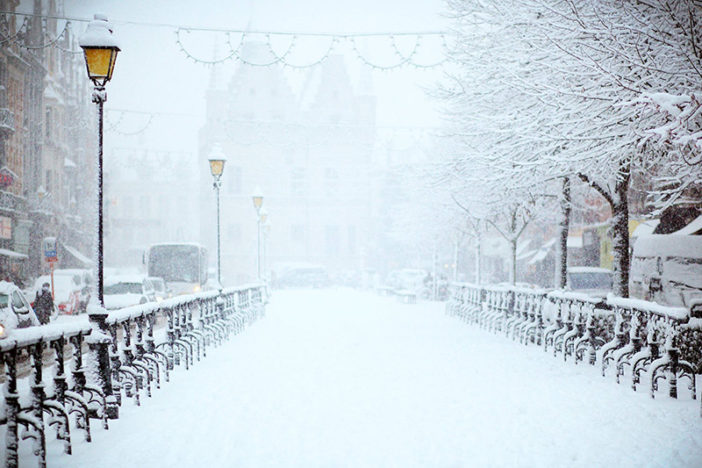 By February, East Europeans are heavily back at work, with their eventual 19% increase in activity. West Europe resembles the South more here, with their mere 5% and 6% increases in activity rates in the beginning of 2013. I wonder if it’s the cold and the snow that’s driving all the Northerners back into their working habits so much faster..? 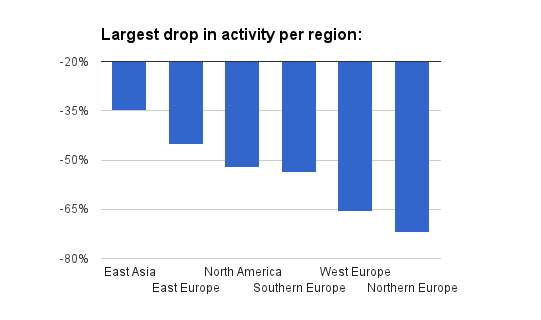 When we talk about taking time off during holidays, it seems that East Asia is the least interested in this with their maximum drop in activity at only 35% over New Year. All other regions in this study took the most time off during Christmas, Northern Europe’s activity levels dropping the most – by a whole 72%!

They bounced back the fastest as well, being 25% more active in February than they were in mid-December. North America ranks somewhere in the middle in their taking time off (max drop 52%) as well as getting back to work in February (peak increase 13%).

Of course in the end what matters is not how many hours you track, but the actual productivity of the work that you do during those hours. Which holidays do you take the most of? With Easter coming up, will we see major drops in activity on Good Friday?

Disclaimer: This analysis is not based on and does not try to be any serious academic work. It is purely speculative conclusions drawn from the statistics of Toggl usage. 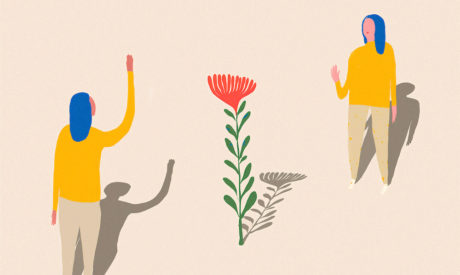 The Perfect One-On-One Format: How To Manage Up

One of the first times I ran a one-on-one meeting with my old boss, she got so frustrated that she asked me to stop the meeting, prepare better, and come back later in the day. 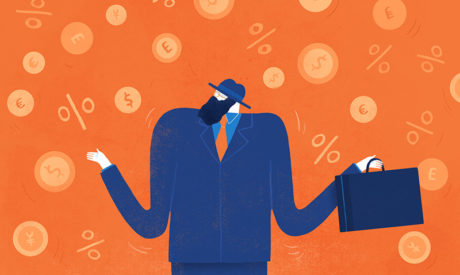 If Upwork fees have you feeling frustrated and confused, this simple guide will (hopefully) shine a light through the darkness. 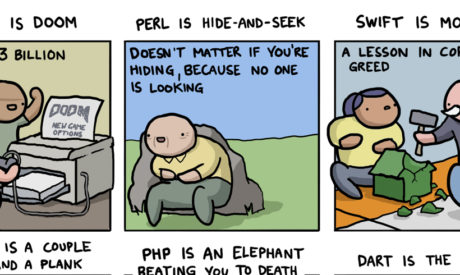 If Programming Languages Were Games [Comic]

The only difference between programming and games is that games have win conditions. But if programming languages were games, JavaScript would clearly be Counter-Strike.