What are the 5 stages of team development?

Each stage plays a vital part in building a high-functioning team.

In 1965, a psychologist named Bruce Tuckman said that teams go through 5 stages of development: forming, storming, norming, performing and adjourning. The stages start from the time that a group first meets until the project ends.

Tuckman didn’t just have a knack for rhyming. (Although, it does make the stages easier to remember.) Each is aptly named and plays a vital part in building a high-functioning team.

The first stage of team development is forming, which is a lot like orientation day at college or a new job. You could even compare it to going out on a first date.

The team has just been introduced and everyone is overly polite and pleasant. At the start, most are excited to start something new and to get to know the other team members.

During this stage, you may discuss:

As the group starts to familiarize themselves, roles and responsibilities will begin to form. It is important for team members to develop relationships and understand what part each person plays.

But, because this stage focuses more on the people than on the work, your team probably won’t be very productive yet.

Have you ever reached the point in a relationship where you become aware of a person’s characteristics and they frustrate or annoy you?

Perhaps they squeeze the toothpaste from the top of the tube instead of the bottom? Eat with their mouth open? Or they listen to the same Drake song 15 times in a row?

Being in a team is like being in a relationship. At first, you may think someone is perfect and flawless. But, then you realize that they aren’t. Once you’re aware of their flaws, you either learn to embrace them or the relationship will end quickly.

In the storming stage, the reality and weight of completing the task at hand have now hit everyone. The initial feelings of excitement and the need to be polite have likely worn off.

Personalities may clash. Members might disagree over how to complete a task or voice their concerns if they feel that someone isn’t pulling their weight. They may even question the authority or guidance of group leaders.

But, it is important to remember that most teams experience conflict. If you are the leader, remind members that disagreements are normal.

Some teams skip over the storming stage or try to avoid conflict at whatever cost. Avoidance usually makes the problem grow until it blows up. So, recognize conflicts and resolve them early on.

During the norming stage, people start to notice and appreciate their team members’ strengths. Groups start to settle into a groove. Everyone is contributing and working as a cohesive unit.

Of course, you may still think that your tech guy’s choice in music is obnoxious. But, you also admire his knowledge of web design and coding skills, and value his opinions on anything tech-related.

Storming sometimes overlaps with norming. As new tasks arise, groups may still experience a few conflicts. If you’ve already dealt with disagreement before, it will probably be easier to address this time.

If you’ve reached the fourth stage, pat yourself on the back. You’re on your way to success.

In the performing stage, members are confident, motivated and familiar enough with the project and their team that they can operate without supervision. Everyone is on the same page and driving full-speed ahead towards the final goal.

The fourth stage is the one that all groups strive to reach. Yet, some do not make it. They usually fail to overcome conflict and can’t work together.

In 1977, Tuckman added a fifth stage called adjourning. (Sadly, not a perfect rhyme.) Once a project ends, the team disbands. This phase is sometimes known as mourning because members have grown close and feel a loss now that the experience is over. 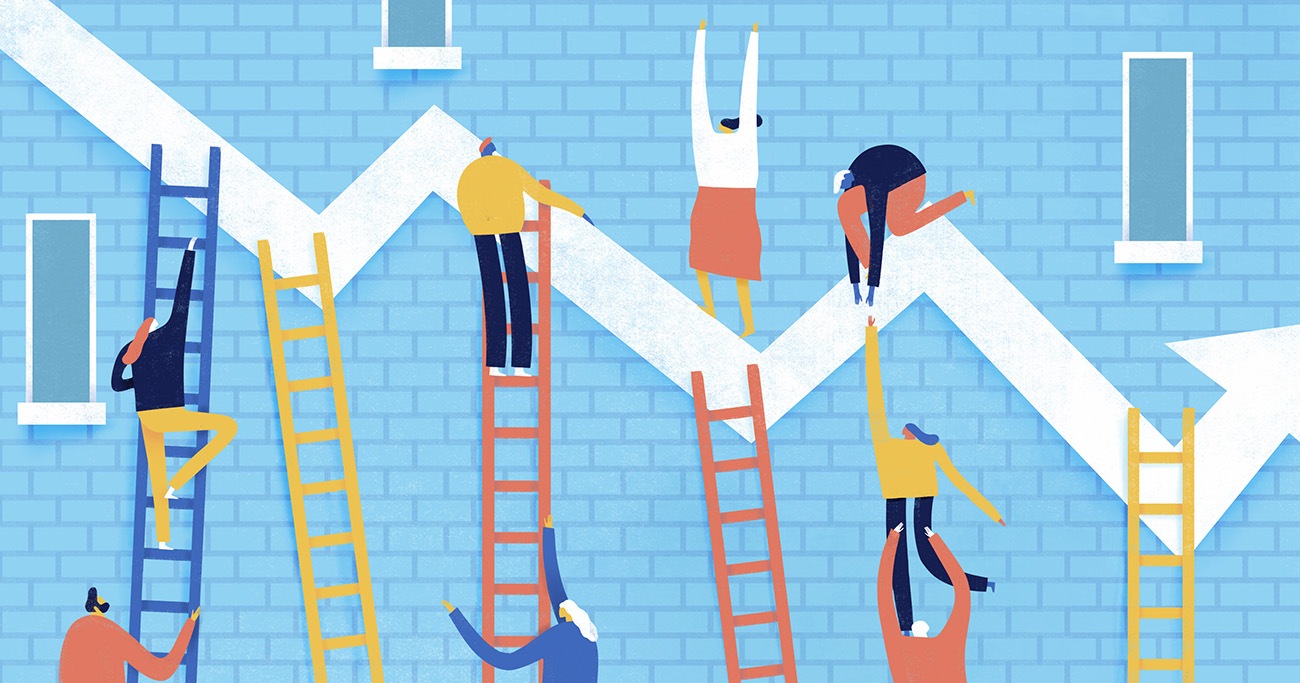 Why are the 5 stages of group development important?

Groups are so in-sync during the performing stage that it seems to happen naturally. But, don’t be fooled. The most effective and high-functioning teams are cultivated.

Throwing a group of talented people together doesn’t mean that they will form a great team. Hoping that your company or project will be a success won’t make it happen.

How can you help your team advance in their development?

Business owners, managers, and entrepreneurs are often viewed as team leaders. If something fails, you may blame yourself. If it succeeds, you’ll receive the praise.

Whether you are leading your entire company or a smaller project group, you have a huge influence on team development and performance. It’s almost like being Captain America to The Avengers or Steve Jobs to Apple. Of course, those are some big shoes to fill.

You don’t have to gain superpowers from a serum or create one of the most iconic brands of your generation to be a great leader.

Guide your team through each stage of the process with the following tips:

1. Set a clear purpose and mission and revisit it throughout the process.

Why does your team or company exist? What values matter to you? What problem will you solve? Why do you need to solve it?

All these questions should be answered with a clear purpose and mission statement. It is the framework that will help you make decisions. It gives you direction. Without it, you’ll go nowhere.

People get so lost in a specific task that they forget why they are doing it in the first place. It is easy to lose sight of the “big picture”. Teams need a clear purpose and mission and should be reminded of them often.

2. Set ground rules and make sure they are followed.

Rules may not sound fun, but they clear up confusion. Without them, no one will know what is considered acceptable behavior. Everyone will have their own “style” of doing things. Groups without rules are disjointed, prone to conflict and inefficient.

One of the first tasks that teams should do is establish ground rules. These can cover how to interact in the group to how to complete tasks efficiently. Some examples are:

Remember that rules are created to help your team stay focused on what matters most─performance.

3. Let other members act as leaders or facilitators.

Every team should have a facilitator─a person who leads and guides meetings and discussions. Someone who drives the group towards a common goal.

As a company founder or manager, you may be the designated team leader. But, that doesn’t mean you should always be the one leading.

Leading a team is tiring. Try to do it all on your own and you’ll burn out fast.

Sometimes, there may even be another member of the group more qualified to lead a discussion than you. If you are discussing the security of a mobile app you are building, the best facilitator could be the cyber security expert on your team?

High-functioning teams work so well together that facilitator roles can rotate without impacting their performance.

4. Don’t try to avoid conflict. It is normal and can be healthy.

If everyone in your group thinks and acts the same, then why do you have a group? The benefit of working in a team is that you have access to diverse experiences, skills, and opinions that aren’t possible alone.

When members disagree about something, listen to each side. But, don’t take one. Search for common ground. For example, each person wants to reach the end goal.

When conflicts are resolved, it can improve existing processes and bond members together.

Each person in your group holds some value, otherwise they wouldn’t be there, right? Remind your team to listen to each person’s insight.

Early on, create an environment that is open and non-judgmental. Hold brainstorming sessions. Write down every idea that is offered, no matter how ridiculous it sounds. Some of the greatest entrepreneurs and inventors have had failed companies and ill-conceived ideas.

For every brilliant idea, there are 100 terrible ones. Encouraging your team to share their ideas and opinions is the key to finding the “big ideas”.

6. End each meeting with insightful and constructive feedback that improves the group process.

When you lead a group, part of your responsibility is to observe. Study how the team functions as a unit and individually.

What are they doing well? What do they need to improve? Give individual feedback in one-on-one meetings. But, you can point out areas of improvement or strengths to the group as a whole, without pointing fingers.

Don’t scold teams for their mistakes and failures, without showing them what went wrong. Don’t point out problems without offering solutions and advice.

It is important to give criticism in a way that empowers them to do better.

Nobody likes a Negative Nancy or Debbie Downer either. Tell teams what they are doing right as well as what they need to improve.

As a leader, don’t think that you are flawless though. Give and ask for feedback from your team. That could mean sending out a weekly or monthly anonymous survey.

2. Close your speech in a memorable way: compliment your audience, deliver a punchline or share a shocking information or quote that suggests urgency.

7. To progress, everyone must contribute and participate.

The point of having a team is to work together. Each person plays a part and has something to contribute. When one person fails to complete a task, the rest of the group suffers.

It is important to instill this sense of responsibility in a group. But, you may still need to remind and motivate members to be productive.

This is another area where time tracking can help. With Toggl Track, team members can track the work that they do. This is especially useful if you have some people that are working remotely.

Even if your group has two or three leaders, you can’t always monitor your team. You can’t look over their shoulders and make sure that everyone is doing their work. Ideally, your team is made up of reliable people that know and fulfill their responsibilities.

There are other advantages to tracking your time with an app though. When you know how long a process takes, you can identify areas that could be made more efficient. Then, develop more productive habits. It can also help you predict how much additional time your group might need to complete the current project.

If powerful superhero and entrepreneur teams have taught us anything, it is that working with others can increase your strength and success. Some projects you just can’t tackle alone.

Building a team isn’t easy. It is a process. Knowing each stage of development can help you create all-star teams that deliver amazing results.

Take control of your time.