From the early days of tech to the present, women have contributed to scientific and technical breakthroughs. Although their work has changed the ways we live today and laid the foundations for further technological exploration and innovation, many pioneers haven’t received widespread recognition.

We wanted to highlight all the wonderful work done by women in science and tech fields. Whether it’s changing the world through their inventions or getting people interested in technology, the contributions they’ve made and continue to make are deserving of appreciation.

A pioneer in thermoelectrics, Telkes invented the first thermoelectrical power generator and the first solar heated home with architect Eleanor Raymond in 1947, earning her the nickname “Sun Queen.”

As a decorated Polish chemist, Stephanie Kwolek invented the chemical compound that went on the save millions of lives: Kevlar – the material in bulletproof vests

Biomedical engineer Nina Tandon is founder and CEO of EpiBone, a company developing the technology to grow bones from patient‘s stem cells.

Simone Giertz is a Swedish inventor of hilarious robots that “help” with everyday tasks. Her endearing helpers challenge today‘s dogmas of functionality and usefulness and make millions of fans laugh.

At 16, scientist Assa Abdel Hamid discovered a way to turn plastic into biofuel, using the cheapest method so far. Her technology is on its way to transforming the economy of her home country, Egypt.

Until 1936, scientists believed the Earth‘s core was a molten sphere. It was Danish seismologist and geophysicist Inge Lehmann‘s tedious measurements of seismic activity that led her to conclude that the Earth had a solid inner core – one of her many discoveries that help shape the understanding of our planet.

Space debris is a growing problem, as collisions with spacecraft or the Earth‘s surface become more and more likely. Amber Yang‘s astrophysical computations make it possible to efficiently foresee the flight path of space debris circulating the Earth‘s atmosphere – and all this before even finishing high school!

Computer scientist Joy Buolamwini‘s work centers around “algorithmic justice,” a term that is becoming more and more important for A.I. technology. Her focus is on identifying bias in algorithms, such as facial recognition software, and implementing solutions to ensure a just analysis of underrepresented groups.

While visiting her home country of Nigeria, electrical engineer Funke Opeke noticed how bad the internet connection was. She raised money and coordinated the construction of over 7000 kilometers of fiber optic cable across the ocean floor from Nigeria to Portugal – a feat which has been attributed to helping Nigeria‘s become Africa‘s biggest economy.

Without rocket scientist Yvonne Brill, space travel would have taken a lot longer. Her invention, lightweight yet high-power propulsion systems, are used to this day to keep everything from communication to weather satellites in orbit.

The life of a programmer is hard. I’m not saying other jobs are easy. However, making a living as a developer demands solid effort and consistent focus. Us developers work alongside marketers, designers, managers, content creators, and many others. But, our quirky (and rewarding) lifestyle is often misunderstood. 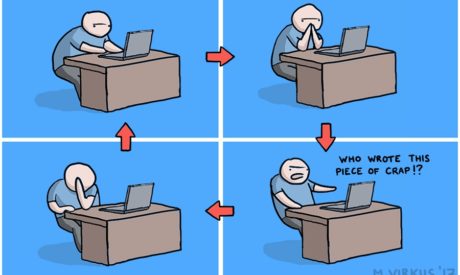 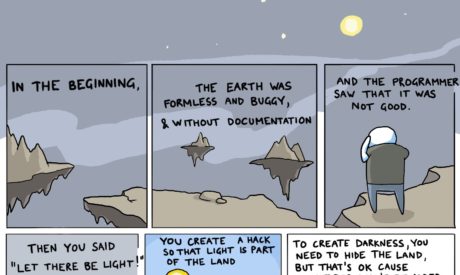 If The World Was Created By A Programmer [Comic]

In the beginning, there was light and darkness and stack overflow, which is really just a combination of the two.