Here at Toggl, we love our support team. While being able to provide great support to awesome customers can be incredibly fulfilling, the job can get a little redundant. No matter where you work, you’ll likely encounter these 10 customers and their questions.

This comic was created by James Chapman and the Toggl Team – the people behind the world’s no. 1-time tracking app (certified, probably).

If you’ve ever wondered how bad people really are at computers, the answer is quite bad. The Nielsen Norman group surveyed 1/4 of a million people between the ages of 16-65 and found that over 50% lacked rudimentary computer skills.

For anyone who has worked at a support desk, this probably isn’t too surprising.

While you can’t personally educate 100,000 people, you can take steps to help people get just a little better acquainted with their future electronic overlords.

Where to start? I would suggest bookmarking this site– it’ll teach customers how to take a screenshot on any device. Both yours and your customer’s lives just got a little bit easier.

Neato! What else have you guys done?

Other than creating a pretty cool time tracker, we’ve also done a comic explaining tech jobs with a simple lightbulb.

Or another epic piece about how to save the princess using different programming languages.

We’ll also keep doing these comics, so like us on Facebook or follow us on Twitter if you want these hot pieces of comic art delivered right to the place you waste all your time anyway!

If you have any ideas for the next one, or if you think our support comic is missing something, drop a line where it says “Comments”. 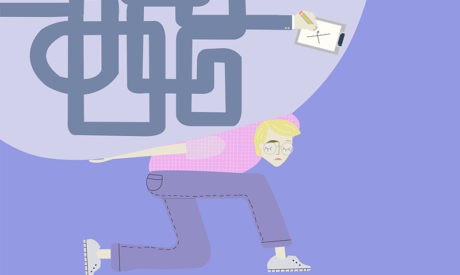 You’ve redesigned a website for a client—let’s call him Joe. You send over the link to the staging site so that he can take a look at what you’ve done so far. Overall, Joe is happy with it (or so he says…). But, then comes the inevitable onslaught of design change requests. First, Joe wants

Most computer security mishaps are a result of human error. Sure, systems can fail. However, most of the time, humans are the weak link. When it comes to digital security, the best tips are often the simplest.

Horoscopes for Your Agency Job [Comic]

Everyone wishes they could get a little glance into the future so if you work at an agency, today just may be your lucky day.