​ ​ We Wanted to See How Much Time We're Wasting, and the Results Are Shocking [Experiment] - Toggl Blog ​ ​ ​ ​
Download The App
Written by Mart Virkus

Do you know what you’re really spending your working hours on? We decided to find out, and the results are pretty shocking.

Over the course of two weeks, our marketing team ran an experiment, properly time tracking the various things we do during our “working hours”. We tracked big projects and random tasks separately to see how much of our effort goes into the right things.

It was way, way more.

You’ll find our reports below, but first, let me give you some context.

That thing about us wasting work time? Trick question. It only works if you conceptualise work time as a strictly 9-to-5 thing.

Our goal was to show that the reality of our time use conflicts with the 9-to-5 concept of how long work should take.

When I look around the Toggl office, I see concentrated faces staring at computer screens, fingers furiously typing away. And I would just sit there, looking at these magnificient, busy creatures, wondering if my time was perhaps better off used for something a little more productive.

But I have also long held a belief that all those people are secretly slacking and really, their furious fingers are just looking for the next big cat video.

I may not be wrong.

People tend to overestimate how much time they spend working. Like really, it has been studied.

But a different question altogether is this – of those hours you do spend on working, how many are on the money?

We decided to track our time with Toggl Track for two weeks to see how much we really work on things that matter. We also agreed to the following rules:

1. Everybody makes a list of weekly goals – the bigger tasks that had to get done within that week (no “researching”, “thinking” or “doodling”).

2. We only count work on these goals as “productive”. Only the time spent on working towards these predefined goals would be tracked under corresponding projects.

3. Multitasking and random interruptions get tracked under “no project”. This is to create a distinction between productive and unproductive work time.

4. Anything between “kinda working” and “procrastinating” won’t be tracked at all. Because that is not really working.

These rules are hugely important – as with any system, you can’t use time tracking unless you figure out why you need it and how you’re going to do it.

Another important thing is to be completely honest. Right from the start, we decided to do our challenge in a judgement free zone – that’s the only way you’ll get an accurate idea of your time use habits.

Do you know what is the number one problem managers have with using Toggl? It’s getting their teams to use time tracking in the first place.

People don’t want to feel like they may be monitored and judged (or even fired) because of what their timesheets or reports say about their time use. And if you’re judging them on an hourly basis, then hours is what you’ll get.

So let’s look at hours. This is Annika‘s 1st week of the experiment: 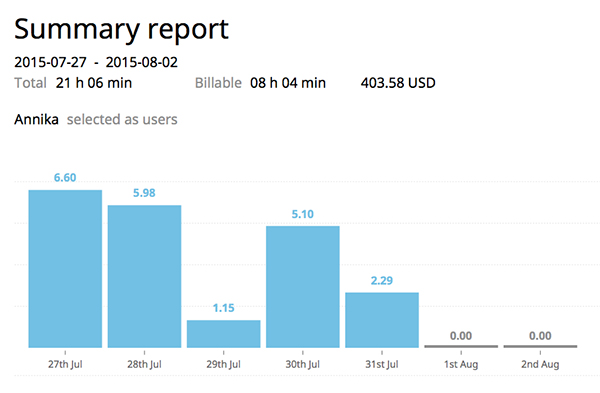 Holy sh*t! 21 hours per week? And does she even work on Wednesdays??

Hey, it gets worse when you break it down: 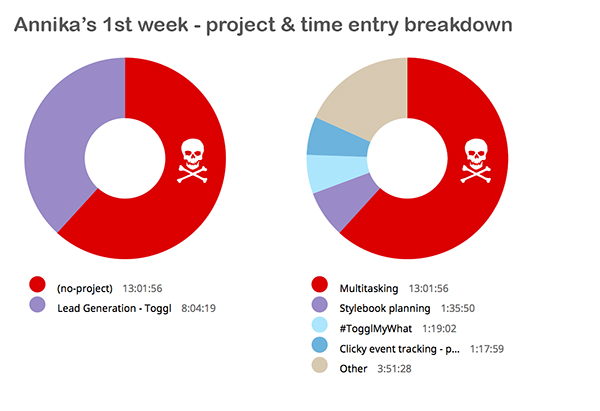 Of those meagre 21 hours, a whopping 13 hours was spent on multitasking (the skull on red sector) and stuff not related to her goals. Looks like someone’s in for a serious talk about their work ethics! Surely she needs to pick up the slack!

Oh wait, no – she knocked off every item on her to-do list.

At Toggl, we value results – if Annika gets her stuff done, should she be penalised for those hours of piracy? Or for the apparently carefree schedule? Probably not.

OK, but what about those red hours, could these be used smarter? Maybe, BUT before we talk about that, consider another big lesson:

Have you heard of “The Busy Trap”?

Coined by Tim Kreider, the term refers to a modern condition where people bury themselves in busy work for the sake of being busy – because supposedly that is what adults do. One of the main inspirations Annika had for this experiment was this noble, simple idea:

“You can be less busy, and still be successful!”

That’s why I was surprised when she suddenly announced during our post-experiment debrief that since she is not working 40 hour weeks, she could easily fill up her schedule with more stuff.

BOOM – there it was. The busy trap.

Guilt is a powerful thing. Annika summed it up perfectly later, saying: “the 9-to-5 must be in my DNA somewhere. Old habits die hard”. Dunja also said she felt guilty for not tracking 40 hour weeks, thinking she wasn’t working enough.

That is, until she saw that none of us pulled 40-hour weeks. “I felt liberated,” she said. With everybody’s cards on the table, it was easier for all of us to start thinking about actual problems.

So yes, now we can take a look at those little red skulls. The real lesson here is this:

Annika, for example noticed pretty quickly that when she didn’t have a clear vision for what she was going to do with her week, she would end up multitasking a lot, jumping from one task to another.

Actually, we all found that working short weeks wasn’t really a problem – but that planning was.

Here’s an example of 2 days from my own reports: 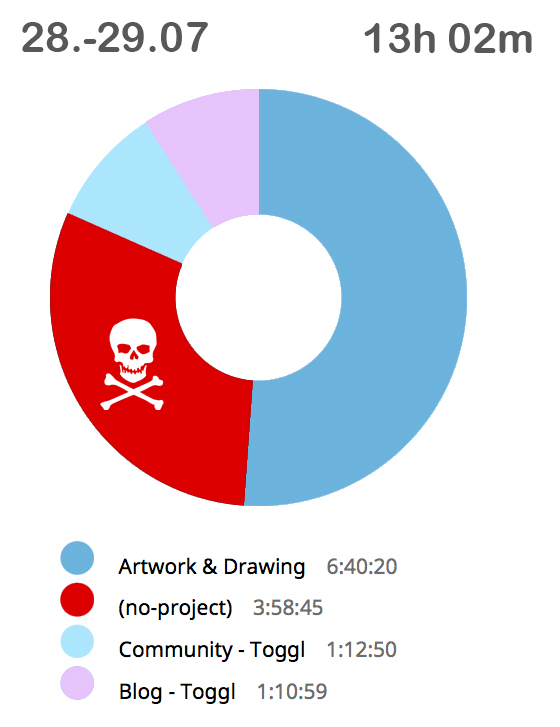 That’s because on these two particular days I was busy working on an infographic about bad managers. Since I knew I had to get this done by Thursday, my focus was pretty good and wasted work time – represented by the menacing skull – wasn’t actually too bad.

But wait – here’s what happened in the next two days: As the planned project is winding down, you can see the wasted work sector growing, as I start looking for things to do. Bad things. Unplanned things.

By Friday, all order has collapsed – my time count shows I tracked just under 4 hours on work related stuff – of which 40% was pretty random.

Again, I’m not saying there’s anything wrong with having a short day – but the reports show that having clear goals makes all the difference.

Let’s look at another example. This is the first week Liisa, our Toggl Business product lead, tracked in our experiment: 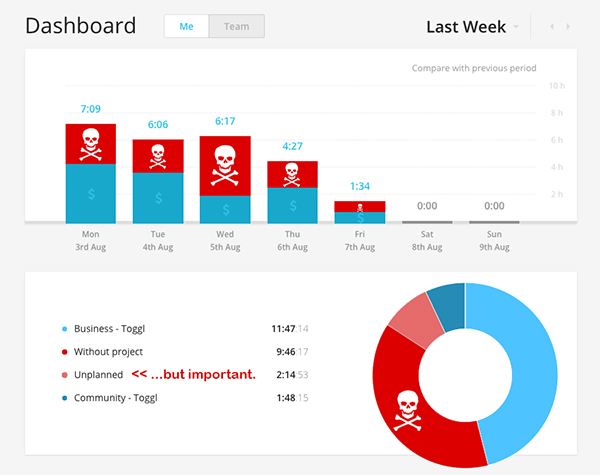 She actually tagged all her focused work with billable rates, which makes it easy to track daily habits in the weekly view (smart!).

As you’ve come to expect from Toggl by now, it looks a little slacky. But Liisa ain’t no fool, and she’s learned from tracking her habits.

Take a look at what her next week looked like – this time with improved planning: 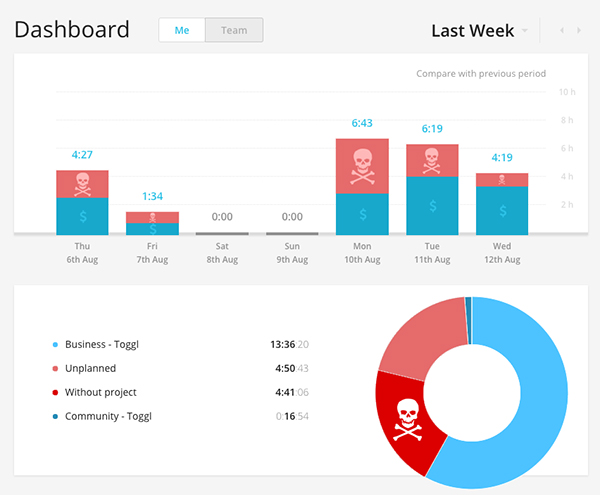 I’ve changed most of the reds to softer pinks here, because the “unplanned” activities in this case are actually pretty focused and important – but her multitasking dropped by a whopping 52%!

That’s not the only lesson she took out of the experiment – she is also trying to even her hours over her work days. While the number of hours doesn’t really matter, she did find that going too hard on some days and not doing much on others did cause a lot of stress. Which, of course, wasn’t doing wonders for her productivity.

Notice anything else odd? She flipped her week, setting Wednesday as the starting day. She works closely with the development team, so in order to be a more efficient manager, she decided to sync her schedule with that of the developers.

And that’s really the key lesson from all this – you have to work smarter, not longer.

If you told us right now that this 20-hour workweek BS won’t work, and that we have to start clocking 8 hour days, we could actually do that with no trouble at all.

It’s not like it’s hard to add hours in Toggl.

But if you’re after meaningful hours, you have to rethink the relationship between work and time. That relationship is fluid. At one point during the experiment, Dunja wrote a 500-word article in 20 minutes. In another case, she spent an hour on a three-line e-mail.

Actually no, she didn’t – she just took a long break, got back to work later and finished it in two minutes.

Time tracking sometimes seem like a negative thing, an activity imposed by the management and designed to monitor and oppress the worker. But we found it can also be a liberating, empowering experience. Liberating in the sense that it shows the human side of modern work life. Empowering in the sense that it shows you how you can not just work better, but that you can work less.

As for us, we’re not yet in a position to allow ourselves the famous 4-hour workweek. But with a little thought and some rearranging, we could be in a pretty good place.

Do you have something interesting to share about your work habits? Let us know in the comments, or drop us a line at mart.virkus@toggl.com! 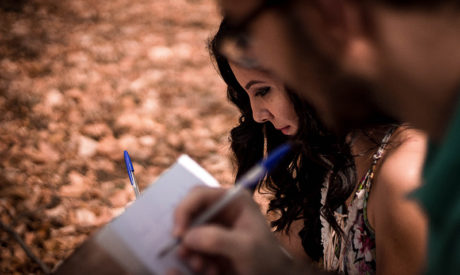 Be A Better Writer in 4 1/2 Simple Steps

To become a better writer, it’s important to reflect on the way you wield your language. After all, language is our strongest tool for communicating with the world around us, especially on a larger scale. 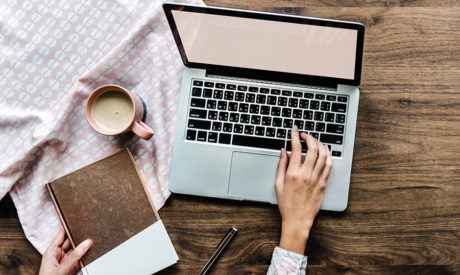 Why the Humble Paper Notebook is Still The Greatest Productivity Tool

Despite the rise of many productivity apps and online tools, there’s one method of notetaking that just won’t go away and still stands the test of time. No matter how fancy the latest smartphone is, it just can’t beat the classic paper notebook. 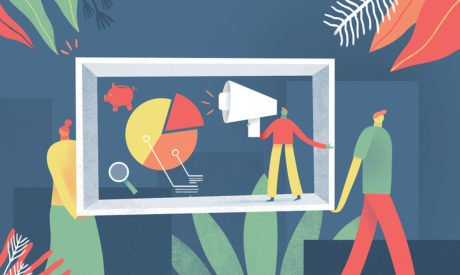 How to Institute an Effective Change Management Process

Knowing how to effectively lead a change management process can make those dreaded transitions easier.