Workplaces run on one thing: caffeine—wait, no, I mean drama; for this reason, you must have proper conflict resolution in the workplace.

Conflict is a natural part of human group interactions.

Expect it, understand it, and know how to manage it. When you know how to handle conflict in the workplace, you can create a team with unshakeable focus and emotional resilience.

1. Know the Rules of the Road

If you feel bent out of shape about someone’s behavior, take a moment to breathe and let your emotions calm down.

Then, before talking with the person (even to set up a meeting), do your homework.

Don’t just Google “how to resolve conflict” and brood about how to fix the other person’s mistakes/flaws. Instead, ask yourself a difficult (and mature) question: “How did I contribute to this problem?”

As a leader, you’re responsible to define appropriate behavior and enforce these boundaries.

Make sure everyone has a clear understanding (in writing) before conflicts inevitably break out. With a clear code of conduct at your disposal, you can be seen as enforcing policy – not inventing it on the spot.

Let people know their emotions are valid, but not their behaviors.

For example, tell a couple of warring salespeople, “You come from different cultures, in which your personalities and behaviors are perfectly acceptable. However, in this work environment, you must speak to coworkers and clients in neutral, professional language. I understand you want to express your individuality, but only so far as it doesn’t offend others.”

Once you’ve identified both your and the other person’s roles in this conflict, ask them to set aside some time for resolving your conflict.

Pick a place you can talk openly and without interruption. Ideally, this will be within 24 hours of the incident. In some cases, it’s best to “sleep on the problem” and address it the next morning.

But, don’t let unresolved conflict at work simmer for too long.

If you’re a team leader, you know you need to nip conflicts in the bud.

However, don’t just call people onto the carpet for a “top-down” lecture. Wait until everyone’s emotions have cooled off – including yours.

For example, you could send out the following email: “Chad and LaVonne: take an early lunch and meet me in the conference room in an hour-and-a-half.”

Give people time to cool down and get them out of the building (or, at least, eyeshot). Limit the gossip that naturally follows conflict and let emotions subside.

As soon as possible after that, however, gather all parties in a private space and address the issue without further delay.

3. Conflict is Natural – Be Prepared

As I said before, workplace conflict is as ubiquitous as coffee breaks and long, boring meetings.

Perhaps the greatest piece of advice I can offer is this: don’t get upset about being upset.

Build an arsenal of techniques for dealing with conflict and research the conflict stage of team development.

Knowing conflict is inevitable doesn’t mean you have to dread it.

Simply expect dramas to crop up and become a master of conflict resolution in the workplace before the next “personality problem” arises.

Today’s executives are hiring and promoting leaders who don’t avoid conflict – they manage and address it.

Demonstrate your ability to deal with anything that arises without getting involved or making it worse. Handle people wisely and watch your career grow and blossom – your bosses are watching!

You can minimize conflict in the workplace by helping your team members address their personality differences in safe, fun spaces like team-building games.

For example, the Bridge Building game requires teams to use verbal communication (not gestures or images) to work together and create solutions.

Conflicts often arise when a shy person tolerates unwanted behavior from a coworker and finally snaps. Instead of waiting until your IT person has “had enough” of that bossy salesperson, schedule a team-building game in which he has center stage.

Don’t stand by as your team grimaces at the QA officer behind her back, get them to open up and address everyone in the organization with clarity and respect.

5. Stay Calm and Get Specific

Managing conflict in the workplace means keeping it civil, especially if people have already “crossed the line.”

Avoid accusations like “you never listen to me” or “you always assign me impossible tasks.” Not only are these statements vague, they also betray the fact that you’ve held a grudge for some time without addressing it.

Don’t let the conversation devolve into a discussion of whether you should have brought this up sooner. Instead, bring up a specific and recent issue and address a focused issue.

For example, you could say “You interrupted me repeatedly in yesterday’s finance meeting” or “the perpetual motion machine you assigned my team to design is patently impossible to create.”

When one employee feels another has treated them rudely or inappropriately, they deserve to be heard. However, you must also consider the person accused of crossing the line. By requiring everyone to stick to specifics, you take some of the emotions out of difficult conversations.

6. Be Patient and Listen

When we feel offended, we often approach conflict resolution as a way to vent or even scores.

However, this behavior usually backfires spectacularly.

Instead, use your best active listening techniques when confronting workplace issues. You can facilitate conflict resolution in the workplace with much less grinding of teeth simply by modeling and encouraging respectful communication.

Remember, the goal isn’t to win an argument. Conflict resolution in the workplace is about finding ways to work with a difficult person you’re going to see 5-days-a-week for a long time to come.

Help people (especially the more aggressive team member in a conflict) actively listen by paraphrasing the other person’s perspective/complaint back to them.

Remind them that this listening activity doesn’t mean they’re automatically at fault – only that they’re acknowledging the other person’s reality.

Resolving workplace conflicts can be hard, especially when people have entrenched disagreements and resentments.

When confronting someone (or facilitating conflict resolution between team members), do what diplomats do: find common ground and areas of agreement.

When resolving conflict at work, make a point of agreeing on the points of contention before launching into an unproductive and unfocused debate. Define the problem and ask the other person to confirm your perspective.

To limit time/energy, don’t go into every detail on your “hit list”; keep this meeting focused on only your top priorities.

Only after agreeing on the core issue, take a breath and then ask, “So, how do we deal with this problem?”

8. Focus on the Future

Conflict resolution in the workplace means moving past problems, not wallowing in them.

Stay positive and lead the discussion from a “how are we going to solve this together” frame.

Whether you’re facilitating a conversation or one of the people involved, you need to know how to deal with conflict.

The most productive ways to resolve conflict involve persistently reframing hurt feelings and blockages toward solutions.

If your team members get entrenched in their disagreements, ask them to suggest potential solutions. If you and a person you’re meeting with are veering toward an emotional conflict, take the high ground.

Ask how they see this issue resolving in a way that suits both of you. (If someone backs down and lets the other person “win,” this conflict will only reemerge at a later date.)

So, how do you handle conflicts that can’t be dealt with in just one meeting?

Sometimes, your team needs more conflict resolution in the workplace than you can squeeze into one meeting. When dealing with large, endemic, and seemingly intractable problems, simply go as far as you can in one day and celebrate your (partial) progress.

Your plan may involve meeting again to review the common ground you found in the current meeting and forge ahead.

You could give each participant a task to complete before the next session, such as listing possible solutions.

As a team leader, you could ask workers in conflict to take certain steps when conflict feels imminent, such as taking breaks, using appropriate language, and listening actively.

Compromise and conflict resolution in the workplace involve holding back egos and other kinds of self-control. You (as a team leader) and the people involved in the issue must point out and compliment progress – wherever you see it.

For example, you could say, “The two of you are finishing joint projects much faster since we last spoke. Keep up the good work and let me know if we need to have another meeting.”

If you’re directly involved in the conflict, you could tell the other person, “I noticed you wanted to interrupt me in that meeting, but you bit your tongue. Thanks!”

By rewarding people for changing their behavior, you help them see conflict resolution as part of working as a team. You don’t want people to feel “less than” or unappreciated; this can lead to resentments and further conflicts.

Conflict resolution in the workplace can be a reality – take these to heart, handle dramas quickly when they arise, and create a positive work environment for all your team members!

The 7 Stages Of A Fast Approaching Deadline [Comic]

Wait…was the blog post deadline the 22nd? Are you sure? This comic was created by Extra Fabulous Comics for the Toggl Team – the people behind the world’s no. 1 time tracking app. It always starts the same way. It’s the beginning of the month, you’ve got so much time. Then all of a sudden that time

Great news, fellow developers and hackers – we are now ready to reveal the much requested and greatly missed Reports API. Now you can get the aggregated or detailed information of all the time tracked in a workspace through the API in JSON format. For all the workspace users, for a single user or for 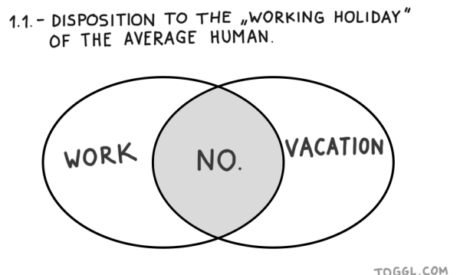 How Much Should You Work During Vacation?