Do you code? HTML5 and the CReateJS suit sound familiar to you? Toggl is looking for developers – you can work from anywhere! Check out our open positions here.

Recently, we completely overhauled Teamweek’s main user interface. In addition to a slicker design, the new UI also provides support for mobile devices and is built on HTML5 canvas using the CreateJS suite.

This blog post discusses the various ways to get the most performance out of the canvas application. The techniques described here are EaselJS-specific but the general idea behind them applies to all canvas applications.

HTML5 canvas is basically a primitive pixel buffer and it takes a lot of effort to build a large application on it. It does provide a nice drawing API and even some more advanced visual effects like drop shadow, but it’s still tough to build an interactive user interface using just a drawing API. That’s where libraries like EaselJS come in. EaselJS (part of the CreateJS suite) provides a very nice Flash-like API for displaying and manipulating objects and handles the drawing part itself.

If you’re building a touch-enabled interface using canvas, you can’t help but compare your canvas app to native apps. Getting the same amount kind of smoothness out of a canvas application, however, requires some trickery. Fortunately, EaselJS is a rather thin framework so you can just dive in, see what it’s doing and figure out how to bend it to you needs.

EaselJS lets you lay out your UI in a hierarchical structure of DisplayObject instances. An instance of Stage is the root for all DisplayObjects and draws everything onto the canvas when you call Stage.update(). Obviously the more elements you have, the longer this operation takes. EaselJS provides a way to cache your objects using the DisplayObject.cache() method. This draws the object onto a separate off-screen canvas and uses to drawImage() to copy pixels from the cache canvas onto the real one when you call update(), so the next time you call update(), you’re drawing 1 object instead of the 1722 objects that are its descendants.

With Teamweek, one of the ways we use caching is that when you drag a task, we cache the rest of the timeline, so virtually only two objects are drawn onto the canvas during dragging. This makes dragging tasks much smoother.

This follows the same idea as tip #1, but instead of manually caching objects, you can layer multiple canvases on top of each other and redraw only the one that changes. EaselJS doesn’t have any kind of built-in support for this but you can simply use multiple Stage instances or extend the Stage class’s functionality to achieve that. Keep in mind that you want to draw onto as few of these layers as possible at a time. It’s no use layering your application onto multiple canvases if you’re going to call Stage.update() on all of them if anything changes.

EaselJS offers pixel-perfect hittest calculation, to determine whether the mouse (or finger) is over an object or not. It does this by drawing the object onto a 1×1 canvas, that represents the mouse pointer, and checking its alpha value to see if anything was drawn (note: as a side effect, items with an alpha value of 0 cannot receive mouse events). Not only is this slow as molasses, .

Update: EaselJS has already thought of this and let’s you specify the time interval, for mousemove hittest calculations.

Unless you’re making a game, you probably don’t need pixel-perfect hit-testing. A bounding-box based method works well enough for most people (like the good ol’ HTML&CSS days, remember?). EaselJS doesn’t offer a documented way of supplying your own hittest logic, so we’re left with just monkey patching the _getObjectsUnderPoint method of the Stage class. What’s more, EaselJS doesn’t have a concept of a DisplayObject’s size (unlike Flash, where we have the automatically-calculated width and height properties), so the bounding box needs to be defined manually.

Getting down and dirty: the code.

To apply these mixins you can just copy the methods to an object, using underscore’s _.extend or a similar function. e.g.

Keep in mind, that you need to call setBoundingBox() manually, every time a DisplayObject changes its size.

In the case of Teamweek, this can be up to 300 times faster than the original hittest, which brings scrolling the timeline from “completely unacceptable” to what we consider “smooth”.

Tip #4. Watch The Size of Your Canvas

Obviously, the larger the canvas the more costly the drawing operation, but if you’re targeting mobile devices, there are some size limits you must keep in mind.

So if you want to support Apple’s older hardware, the size of your canvas cannot exceed 2048×1464.

But that’s not all! Even with smaller sizes, you have to keep your canvas’s aspect ratio between ~3/4 and ~4/3. If you step outside those boundaries, webkit seems to switch to a totally different rendering mode splitting the canvas into multiple fixed-size areas and rendering them separately with a noticeable delay between them.

There doesn’t seem to be any documentation on this but I have confirmed this happens on both Chrome and Safari on iOS versions 6.0.1 and 5.1.1.

EaselJS does a good job at replicating the Flash API but one of the things we used to get for free with Flash is redraw regions. This basically means drawing only the parts of the screen that have changed since the last frame. EaselJS’s Stage.update() simply clears the whole canvas and draws the whole thing again.

Depending on the application, one could significantly increase the drawing speed by overriding the default drawing pipeline and implementing redraw regions in javascript.

Update: As pointed out below, the cost of calculating redraw regions in javascript is huge, so you might want to try other methods before going down this road.

Tip #6. Don’t Draw Anything At All

If you’re using EaselJS, don’t do this:

Unless there is something always happening in your canvas, this just makes sure that your battery runs dry right before you can plug it in. Additionally, if your application is a canvas/HTML hybrid, this can significantly decrease the responsiveness of the HTML-side of your application.

Make sure you have some way of pausing/resuming your redraws operations.

Html5 canvas’s performance is certainly above that of traditional html, especially if you’re holding your redraw operations on a tight leash, but there are a lot of hoops to be jumped through if you’re trying to make your canvas application feel like a native one.

Hopefully, this article has given you some ideas about how to make your application perform well across various devices.

If you have more ideas about how to make canvas apps perform well, feel free to share in the comments! 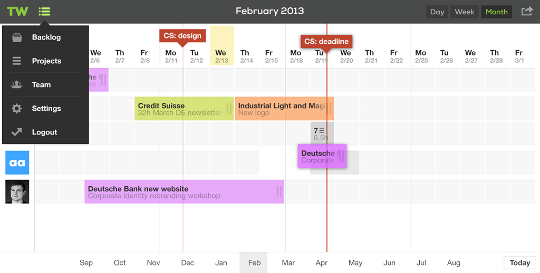 TeamWeek is an online Project Planning Tool with a Team Calendar. Being an antidote to clumsy Gantt charts, it allows managers to respond to change faster.

10 Reasons Robots Are Better At Your Job Than You [Comic]

If you read tech news, you may be convinced the robots are coming for us. Our AI robot overlords may one day take over and make us pay retribution for all the silly things we made their kind do, but we’re not totally convinced they’re quite there yet.

When people think of startups, ping pong, drinking at work, and general tomfoolery may come to mind. But for most, that’s not the reality.

Ah, the airport – a veritable hell of long lines, frisky officers, expensive meals and bad coffee. But to get to where we want to go, we must overcome. We want to share some helpful airport hacks and tips on how to make flying suck less. We do a lot of traveling, both to meet with our