If you’re like most people, office politics are something you’d prefer to avoid altogether.

I can’t blame you. But, here’s the thing: There’s really no staying out of those complex workplace dynamics entirely.

Sure, you can do your best to remove yourself from those gossipy whisper sessions and to always act with integrity at work. However, every now and then, office politics will creep in and play a role in your work-related exchanges.

Sigh. Not exactly the news you wanted to hear, right?

While you might not be able to escape office politics altogether, you can find some ways to deal with them in a way that’s productive—and doesn’t leave you feeling depleted and discouraged.

Let’s dig into everything you need to know to make the most of the complicated exchanges and relationships that can crop up in your office.

What Exactly Are Office Politics?

The activities, attitudes, or behaviors that are used to get or keep power or an advantage within a business or company.

Basically, you can think of office politics as the inner workings and relationships at your workplace.

Office politics often dictate things like how decisions are made and how projects are moved forward—yet, you won’t find them outlined in any sort of manual or standard operating procedure.

These politics can impact really simple things, such as always needing a certain department head’s stamp of approval on a project. But, they can also have much larger effects, such as determining who climbs the ladder and who gets left behind.

Why Do Office Politics Matter?

When you don’t understand the political landscape of your company, it shows. Questions arise. Can you go the distance, handle the rough spots, inspire the troops, get the job done, and garner respect?

Political know-how becomes important—and those who fail to develop such skills are often the ones who get left behind.

Many people assume that a familiarity with office politics means you’ll be constantly plotting, scheming, and stabbing colleagues in the back.

However, that doesn’t need to be the case. Whether you like them or not, office politics exist—and, if you plan to get things accomplished and succeed within your company, you at least need to familiarize yourself with those politics so that you can navigate an appropriate path for yourself.

How to Deal With Office Politics

Office politics are a fact of your work life. What can you do to make that a positive—rather than a major drawback? Here are seven key tips you should know to deal with them effectively.

1. Sit Back and Observe

In order to deal with office politics, you first need to understand them. You can learn a lot about these various aspects of your organization by observing others.

Ask some key questions: What are the core values and how are they enacted? Are short- or long-term results more valued? How are decisions made? How much risk is tolerated?

-explains an article for The Wall Street Journal,-

The answers to these questions should give you a good sense of the culture of your organization.

It’s also worth taking a look at the organizational chart of your company, so you can get a better understanding of who you should approach for decisions.

Office politics often circumvent the formal organizational structure. So, sit back and observe for a while, and then map the political power and influence in your organization, rather than people’s rank or job title,

-states an article for MindTools.

Here’s the disheartening thing about much of office politics:

Of course, not all office politics need to be toxic. But, if you’re working in an environment where you feel this worried or paranoid, there are things you can do to proactively cover your bases.

The biggest one? Keeping documentation.

If people give you important directions or changes in a face-to-face conversation, drop those in an email to confirm. That way, you’ll have that exchange in writing should you need to reference back to it later—eliminating a lot of that dreaded “he said, she said.”

Also, track your time and what projects and assignments you work on. That will help to mitigate the risk of getting blamed for something that wasn’t actually your responsibility.

Nobody wants to work in a workplace where they feel like they need to keep a constant eye out for malicious intent—and, if that’s what you’re dealing with, it might be time to consider finding a different employer.

But, if you just want to have some supporting documentation to help you stand your ground when the occasional disagreement pops up?

Taking care to keep somewhat detailed records can go a long way in helping you.

Even if office politics impact every single person within your organization, they can still feel isolating.

It’s easy to feel like you’re the only one growing frustrated with that power struggle between two managers or that one colleague who’s a notorious tattletale.

Rest assured, you aren’t the only one who’s noticing or getting discouraged with these things.

Finding a support system of other co-workers can help you maintain a far more positive outlook—even when office dynamics become challenging.

Find a group of colleagues that you can eat lunch with or head out to an after-work happy hour with to blow off some steam.

That shouldn’t be your opportunity to rant, rave, and complain about everyone in your office. Instead, look at it as your chance to enforce some positive bonds within your company—which will hopefully outweigh and overshadow any of the other frustrating relationships that are coming to light.

While you’re at it, it’s also smart to build some relationships with various supervisors that you work with.

Doing so will increase your comfort level when you do have a question or problem that you need to bring to someone who’s higher up.

One important note: There’s a difference between building a relationship and unabashed brown-nosing.

Your goal here is to just establish a slightly deeper relationship—and not to get anything else out of that. Make sure you’re being honest and authentic, and you’ll avoid tiptoeing into suck-up territory.

When you’re working in a culture that’s highly political, it’s tempting to just want to blend in—you don’t want to be labeled as yet another pot-stirrer.

But, remember this: You are your own best advocate at work.

Nobody else is going to stand up and protect your reputation, promote your own achievements, or champion your ideas. That’s entirely up to you.

That can be intimidating—particularly when you’ve grown so used to sitting back and flying under the radar. However, you don’t want to become a doormat. Take a deep breath and stand up for yourself.

When a colleague attempts to take credit for an assignment or project that you actually completed? Point out that it was actually you who saw that over the finish line—totally solo.

Office politics can be brutal, but you don’t have much room to complain about getting steamrolled if you never make any effort to change that dynamic for yourself.

5. Resist the Urge to Take Sides

You’re working on a project that requires input from several different departments. One manager seems to think that you should take his approach, while a manager from a different team insists that her way is best.

Now what? You’re stuck in this power struggle between two people who are higher-ranking than you, and it’s preventing you from actually moving forward on that project.

In these cases, it’s tempting to want to take a side just so you can make some progress and get closer to a decision. But, particularly when the arguing parties are your superiors, it’s best to resist rallying with one person.

Place them on a common communication platform and ensure open communications among all parties so that no one can claim ‘I didn’t say that.’ By not taking sides, you’ll help to direct conflict resolution in an objective manner,

-says Lawrence Cheok in an article for Lifehack,-

You’ll also build trust with both parties. That’ll help to keep the engagements constructive and focus on business objectives.

As mentioned earlier, office politics are normal and they don’t always need to involve negative mind games and backstabbing.

But, if you’re stuck in a cycle that seems to require that sort of behavior? Make your best effort to be the bigger person and always take the high road.

Perform random acts of kindness for your colleagues.

Refuse to participate (or even shut down) those nasty gossip sessions that occur around the breakroom coffee pot. When conflicts shift from productive arguments to personal attacks, step in and remind everybody to keep things civil.

Even if that sets you back a little bit in terms of how your organization operates (that’s frustrating, I know) at least you can hold your head high and rest assured that you did your best to always behave in a way that you can be proud of.

7. Know When it’s Time to Call it Quits

If the politics in your office have taken a turn to be downright toxic? That can be difficult to deal with and can have a huge negative impact on your wellbeing inside of the office and out.

If you’re struggling to deal with conflicts or an undeniably negative work environment, your best bet is to look for something better.

You’re entitled to a workspace where you feel confident and comfortable—rather than like you’re constantly under attack.

Know where your own personal line is between an office environment that’s stereotypically political and one that’s toxic. Unfortunately, no amount of positive action on your end will fix the latter.

Office politics can be tough to deal with, but they’re also inevitable. Fortunately, there are some things you can do to own your role in those politics and make the most of them.

To recap, when dealing with office politics, it’s smart to:

Do those things and coping with the inner workings of your workplace will become a whole lot easier—and, ultimately, far more productive.

Almost every millennial wants an exciting job that allows them to travel to as many places as possible. That is mainly because nobody can truly separate ‘business’ from ‘pleasure’, especially when they are travelling. But travelling can be exhausting and frustrating in the long run without the proper tools. Surely, there are plenty of apps 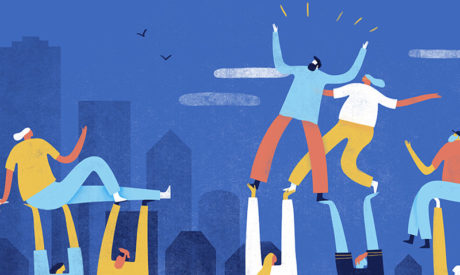 The 5 Communication Styles Every Manager Needs to Know