Overconfidence bias is something that can strike at any time, even to the best of us.

On a good day, we call it conviction–an unshakeable belief that what we’re doing is right. On a bad day, it blinds us to the mistakes in our decisions and thought processes.

We probably wouldn’t be human without it.

Unfortunately, the overconfidence bias can do a lot of damage to our relationships and productivity at work. But before we talk about the cure, let’s talk about the illness.

What is the overconfidence bias?

Answer: it’s when a person is absolutely totally extremely convinced that they are better (in some way, shape, or form) than the people around them.

How can I recognize overconfidence?

A bunch of studies have revealed that the overconfidence bias usually manifests in three different ways:

Overestimation happens when you overestimate your actual abilities, performance, the amount of control you have, or your chance of success.

Say John thinks he can eat five packs of ramen noodles in a single sitting. His buddies decide to test his theory, and find that he can only eat three packs. In this situation, John has overestimated himself.

Overplacement is about believing that your position is higher than those of the people around you.

Susie and the other employees get rated on a 1-100 scale by their boss, Mr. 100 Man. She’s convinced that she has the best score in the office. In reality, though, Bob and Marley received better scores than she did. In this situation, Susie has overplaced her rating.

Overprecision happens when you’re too confident that you know the truth. This is the most difficult type of overconfidence to measure and understand.

Here’s an example: Professor X gives a ten-word spelling test one day and asks his students how they think they did. They respond that they are 100% certain about their results, implying that they believe they got all the questions right.

Once he grades the tests, he find that, on average, his students scored an 80. That means they had an error rate of 20%. If they had been perfectly precise, 100% confidence would’ve corresponded to 100% correctness.

That’s cool and all, but why should I care?

There are a lot of cognitive biases that can affect humans, but overconfidence has been called “one of the most pervasive and potentially catastrophic” of them all.

Arrived late to work?
Missed a plane?
Bounced a check?
Procrastinated to the point of failure?

These are just a few types of “cliffs” that we regularly fall off of because of overconfidence.

Here’s a specific scenario to illustrate:

Chicken Little gives you a research assignment, asking you to catalogue how many times the sky has fallen, and to report back two days from now.

You shrug it off and say, “That sounds easy. I’ll do it tomorrow.” Tomorrow turns into tonight and all of a sudden you’re scrambling in the wee hours of the morning the day before the task is due to get it done.

That’s a classic example of overestimating your abilities.

You can see how overestimation might cause missed deadlines, shoddy performance, and mental stress that you just can’t seem to shake.

It can cost money (the cost of your missed plane ticket, the business deal that fell through because you overestimated the quality of your pitch), time (the hour spent in traffic that you can’t get back), and your own well-being (the continual stress of failing when you were sure you’d succeed).

If a plaintiff or defendant in a lawsuit believes that they are more deserving or righteous than their legal opponents, they might insist on funnelling money towards continuing an inefficient legal battle.

Corporations and unions who overplace their position could jeopardize the individuals within them by enduring needless labor strikes instead of trying to find a compromise.

Because we often correlate confidence with competence, it’s easy for overconfident leaders to lead their team towards a catastrophic decision.

Ivo Daalder, a senior fellow at the Brookings Institution, explains that countries who are overconfident could even be more prone to engage in wars because of their belief that their military is strong enough to handle sustained conflict.

How can we avoid overconfidence bias in the workplace?

It’s tempting to surround yourself with people who will agree with and empathize with you, but in the office, a team composed entirely of “yes men” can be dangerous. When people agree with everything you do and say (whether it’s out of fear or awe), innovation often stagnates, and you stop making progress.

Devil’s advocates are frustrating, but they push you out of your safe zone and force you to think critically about the strategies you employ. With their help, you might discover better or more efficient methods of doing things, or improve the old ways.

If you want to buy a car, you’re probably not going to run into the dealership and buy the first car you see. Research is important to make sure you don’t run into headaches down the line.

Situations can change at any time, so it’s better to be prepared with all of the information you might need to make an informed decision.

Pretend you’re a secret spy agent on a mission to get the mysterious briefcase from the house of Mister Martin McMillionaire. You’re not going to rush in, guns blazing, ready to crush the opposition (unless you’re John Wick, maybe). You’d probably do some research first–about the layout of the house, the amount of security present, the location of the case… all that good stuff.

Getting the information and making sure it’s accurate makes all the difference between failing before you even step onto Mister Martin McMillionaire’s mansion and getting away with the mysterious briefcase.

Overconfidence in predicting success can be curbed by listing potential causes of failure.

PRO TIP: Try building a fault tree to identify the major threats to your project.

The more possible causes you list, the better prepared you’ll be in case something does go wrong. You can be more realistic about how successful you’ll be by counting how much of a threat each potential problem poses.

#3 Reflect on your mistakes and shortcomings.

Failures suck, but they’re great learning opportunities. Acknowledging our mistakes instead of placing the blame on someone else (like a coworker or subordinate) helps us clear our heads of any hubris that might cloud our judgment. When we feel invincible, we become blinded to the pitfalls and traps that lie ahead.

John C. Maxwell says, “Here are some questions to ask yourself: What plans worked? What decisions yielded good results? What decisions ended up being wrong? If I were to approach the situation again, knowing what I know now, what would I do differently? Why?”

According to psychologist Ron Friedman, “we have a window of about three hours in the beginning of the day when we’re really, really focused. We’re able to have some strong contributions in terms of planning, in terms of thinking, in terms of speaking well.” He suggests making the most of those first three hours by starting with a brief planning session and outlining what you want to accomplish that day. Then, stay proactive.

For example: responding to emails puts us in a reactive mindset. Instead, try sending emails–to clients, coworkers, and companies you’re pitching.

Since people tend to get tired around 2 or 3 pm, he recommends time-blocking less taxing work in the afternoon. Time management is all about knowing your limits and being realistic about how much you can accomplish.

Get started for free

#5 Listen to criticism, even if it hurts.

We’re all human here. So we’re always going to make mistakes, no matter how desperately we try to avoid them. By listening to constructive criticism, we can learn from our mistakes and make changes in the way we operate.

Often, when we get criticized, our first impulse is to go on the defense. The feeling is even stronger when the advice is coming from someone you don’t entirely respect.

But remember: constructive feedback can come from people who are deeply flawed.

And ultimately, it benefits you–the advice can help you improve your skills, your work, and your relationships.

Constructive criticism isn’t an attack on you. And you don’t always have to follow criticism (that’s a myth).

Ignoring criticism and insisting on staying the wrong course can be disastrous, especially for managers.

You lose sight of your performance in comparison to the rest of your team. You don’t know where you’re doing well or where you have room for improvement.

You stop growing, and you might even get lulled into a false sense of security.

Feedback gives you clear markers and goalposts, and it’s especially important for people who want to grow in their careers.

Plus, being too proud to listen to constructive criticism kiiiind of makes us look like arrogant jerks.

It’s why companies A/B test. They want feedback on how they’re doing, and they want to know what works the best. Constructive criticism and feedback from scary higher-ups is kind of like the small-scale, human form of A/B testing.

Listening to criticism (and weighing the costs and benefits of suggested actions) can help us gain new clients and build better relationships with our bosses and coworkers. It keeps us in check.

#6 Be realistic about your commitments.

It’s tempting to take on lots of responsibility to show people (your boss, your nagging mother-in-law, Steve from Cubicle) that you’re amazing and that you can do stuff they can’t.

Sadly, though, taking on too much responsibility is crippling. Instead of coming into work well-rested, overworked and overstressed people turn into half-functioning robots who create half-finished, shoddy work.

To establish a baseline, use Toggl’s time tracking feature, which tracks your time usage for you and presents it in a simple visual report.

Visualizing the amount of time each task takes can help you stop procrastinating.

If database entry usually takes an hour and meetings with clients take three, then you’ll know where to place them on your schedule so you don’t run out of time.

And if you know that you usually take a week to write a kickass whitepaper, then you can set aside enough time to get it done properly.

Overconfidence often develops when we experience a lot of success. As we accomplish more and more things, it’s easy to feel successful and to believe that we’re doing everything right.

But it’s important to remember that we’re capable of making flaws.

In the workplace, humility is especially important–even if you’re a top-level manager. A company can’t function unless its teams work together to achieve objectives.

Trying to handle everything yourself or insisting that your way is the only way is a recipe for disaster.

Humility unites you with your coworkers and employees–it makes you a better leader. And the best thing about humility is that it won’t just help you in the workplace–it’ll improve your relationships with the people you love and care for, too.

Software development is a special kind of a nightmare. The kind that you wish you could wake up from, but can’t, because code is money and money is life.

When we seek advice, we’re generally looking for guidance and, at times, for inspiration. We’ve all felt creatively stuck or discouraged at some point, which is why we illustrated some of our favorite pieces of advice from some brilliant individuals currently doing great creative work. 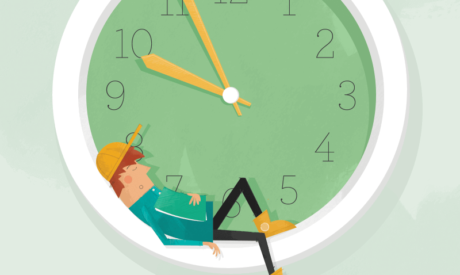 I sometimes like to joke that I put the ‘pro’ in procrastination. Truth be told, I wanted to write this article sooner. I really did. But then there was the option of going out for coffee versus staying in and keeping at something I wasn’t quite sure of. I don’t think I need to tell